A friend of mine has an Office in the Basement of his home. He quite successfully manages his IT himself but every now and then he needs a helping hand, just as we all do. For this Situations I had a VPN into his Office for quite some time.

After he switched Internet Providers we found that his new connection does not come with a Public IPv4 Address but instead his router receives a private IP-Address and his provider then does Carrier-Grade NAT. He also receives a public IPv6 Subnet which is publicly routed.

My friend has a AVM Fritz!Box, which is quite a versatile Modem/Router/Phone System/Wifi-AP/Dect-AP in itself, but it has one really huge drawback: It only support IPSec VPN.

AVMs VPN Implementation does not allow acting as a VPN-Server on an IPv6-Only Connection (according to this Info-Page):

IPv6 VPN connections are not supported by the FRITZ! Box, since no IPv4 data can be transmitted over them. In addition, such IPv6 connections could only be made if both subscribers have IPv6 Internet connectivity, which in most mobile networks and Wi-Fi hotspots is not the case.

My first reaction was keeping the VPN-Server On-Site but switching to OpenVPN, because I knew that OpenVPN could tunnel IPv4 over IPv6. One of the devices in his Office, a Synology Disk-Station is able to act as an OpenVPN server and so –in a pinch– we went with that.

Although that simple Setup worked okay for some time, it had some annoying problems:

With this solution only working half of the time I decided I wanted a more robust solution, that would possibly also scale to other friends' networks.

I wanted a solution that

What I came up with was an OpenVPN-Server running on my VPS hosted by NetCup which provides stable IPv4 and IPv6 connectivity with static IPs. On-Site I used an TP-Link TL-WR841N v13 Router because it resells at only about 16€. (!) The v13 is only supported in recent OpenWRT Snapshots any may or may not work as expected for you. If you want to be sure, you might want to get yourself a TL-WR1043ND which resells at around 32€ but is completely and officially supported.

The On-Site OpenWRT Router gets its Uplink via DHCP from whatever Router is present on the Network and acts as an OpenVPN Client through that Internet Connection. As long as it can connect to the OpenVPN-Server I can SSH into it and examine what's going on in the target network.

Setting up the OpenVPN Server

Setting up the OpenVPN-Server on Debian is quite well documented on the Debian-Wiki and I basically followed it to the word.

One thing I changed was using the name of my friends business (HTDuS) in all configuration- and folder-names, so that I can easily add another network in the future. Also I chose a non-default port and a usefuk tun-Device-Name.

The client-config denotes which routes should be announced to the default_clients who's responsible for them (in this case: the OpenWRT):

As you can see you can freely route some Subnets to one Client and other Nets to other Clients to support, for example, multiple Locations.

For the Clients I generated Keys with Passphrases, while I generated one without for the WRT, because I wanted it to connect on Power-Up without anyone being there to enter a Passphrase.

If you have an iptables-Firewall on your Server (you should!) you will need to allow the incoming VPN Connections:

You can now enable and start the OpenVPN-Server as follows:

Testing the Connection requires generating client-Config-Files. I prefer the Config-Style with embedded keys, so I wrote me a small Shell-Script which generates the Client-Configs for me:

Isolating the Host from the VPN

But depending on what your Server hosts, you can now also reach a lot of services on your Host-System by just adding appropriate routes on your client into the tun-device.

In my case I have some Docker-Container running on the host and Docker uses 172.17.0.0/16 for its internal containers. Simply adding this to the routes on the client would expose the internal Docker-Containers network' to all VPN Clients.

So some further iptables-Rules are required:

They need to be on top of the INPUT-Chain, or some ACCEPT rules which do not explicitly specify interfaces or ip-ranges further down might allow the traffic anyway. I had, for example, some rules like those, which, unexpectedly allowed HTTP-Traffic from the VPN to Docker-Containers running on the Host.

I added an explicit -i eth0 to them, to further harden the Firewall-Setup.

One thing to be aware of while configuring you Firewall: client-to-client in the OpenVPN Server-Config allows VPN-Clients to communicate with each other without the Packagets being processed by the OpenVPN Servers' Kernel, so they are not affected by iptables and do not require FORWARD rules.

This is great I you don't want to have the Host interfere with the OpenVPN but removes some control from your fingertips. Just be aware of this option when you need more control about which Client should be able to communicate with which net.

Setting up OpenWRT depends on which router you got. For the TL-WR841N v13 look up the TFTP Firmware-Link from the OpenWRT-Wiki, connect the TP-Link and your Computer to an Ethernet-Switch, add 192.168.0.66/24 to your Interface, start an TFTP-Server and make it serve the Image as wr841nv13_tp_recovery.bin. Hold the Reset-Key on the WRT and power it on. It fetches the image and Flashes itself.

This procedure is not trivial and it might need multiple tries and debugging to get it going. Most WRTs can usually be also flashed via the vendors Web-UI but this specific firmware-Version rejects non-vendor updates.

Give your self some time and search the Internet for hints, if it doesn't work. You can not really brick these devices, because the TFTP Recovery Mode is burned into their ROM and can not be over-flashed.

After Flashing the Device it will fetch an IP-Adresse via DHCP and open SSH with Username root and no Password. You can then install LUCI, the WebUI by calling opkk update; opkg install luci.

At this point you should be able to connect multiple Computers to the VPN and communicate between them using their 10.97.0.0/16 IPs. They should all have a route to 192.168.124.0/16 through the VPN but obviously nothing is responding to those Packets.

To get OpenVPN running on the WRT you need to install the required Packages: ovpn install openvpn-openssl luci-app-openvpn should give you what you need.

The LUCI-UI shows the VPN and can control it, although the Settings will not be editable via the UI.

You should now add a Firewall-Zone that allows Forwarding into the LAN-Zone. The OpenWRT's Firewall-Concept basically only applies to who's allowed to initiate a connection. All Packets relating to an already established Connection are always allowed. 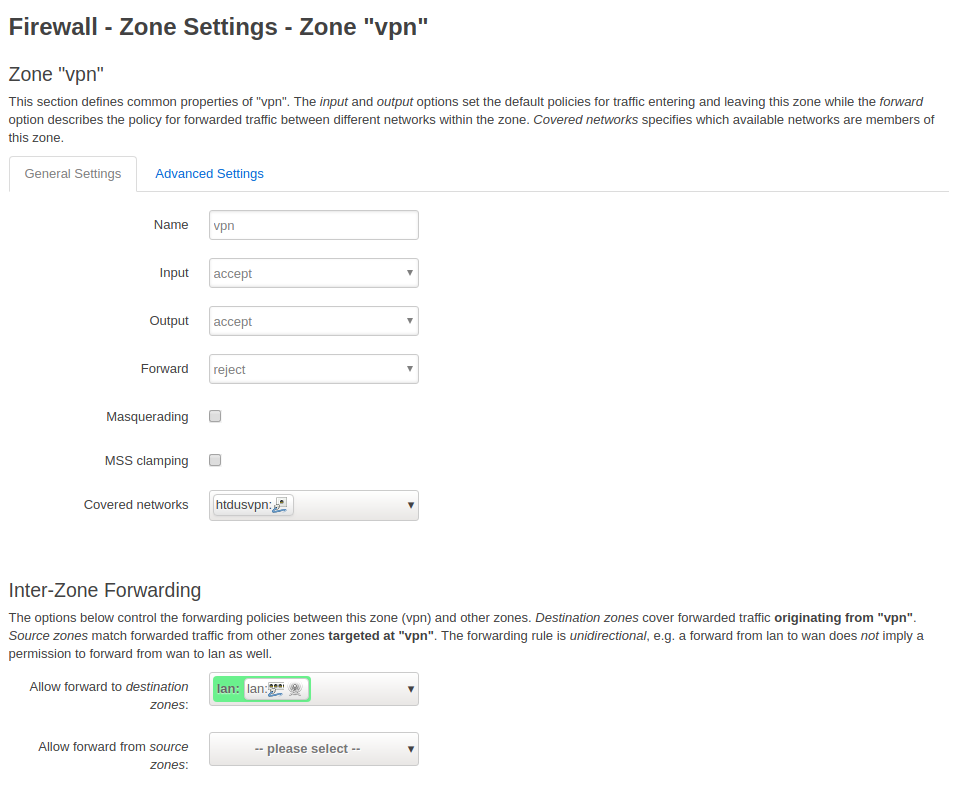 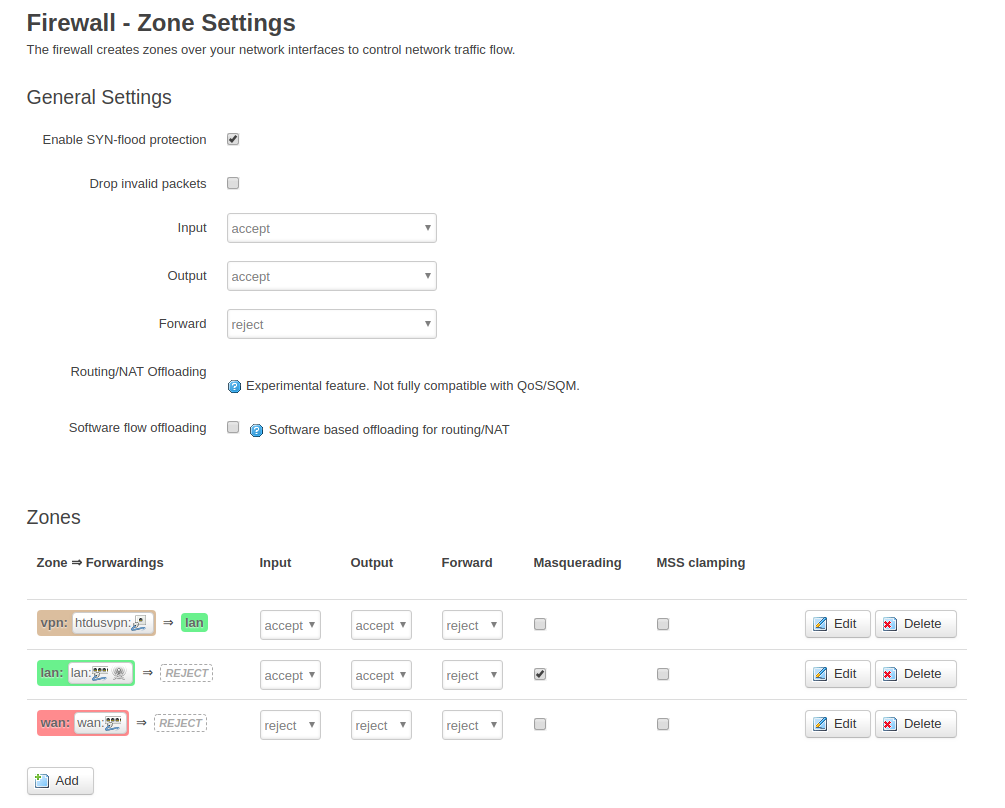 Why Masquerading on the LAN-Interface?

Our scenario here is quite similar, only that our VPN-Clients are behind the Router with their VPN-IPs being "internal" and the target-Network representing being "the internet": It's where the Packets need to be forwarded to it should never see the "internal" IP-Addresses but only the VPN-Gateways' Address.

Testing requires us to have a Network with the targeted IP-Range present. I tried to simulate that by adding another IP to the lan-Interface with ip a a 192.168.124.42/24 dev br-lan but the MASEQERADE-Filter will only use the first IP it finds on an interface and not consider other IPS. Meh.

In the end I mis-used the Guest-Network provided by my Fritz!Box to simulate being in a different Network (and add it's IP-Range to the VPN for testing purposes).

I learned a ton about OpenVPN, Routing, OpenWRT and iptables. The whole Setup took me about 3 days and another on to write this Blog-Post.

I hope it saves you some days or gives you an idea how to setup your VPN-Gateway.